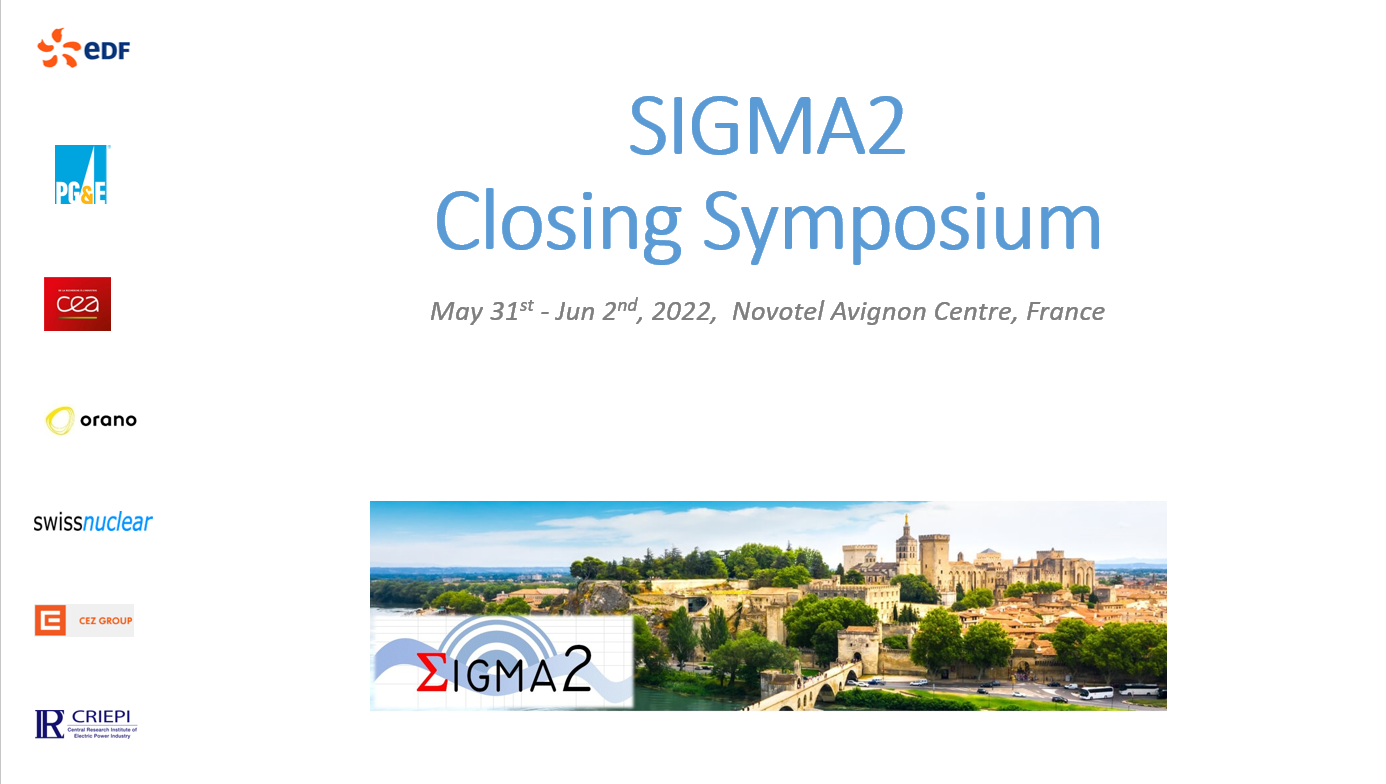 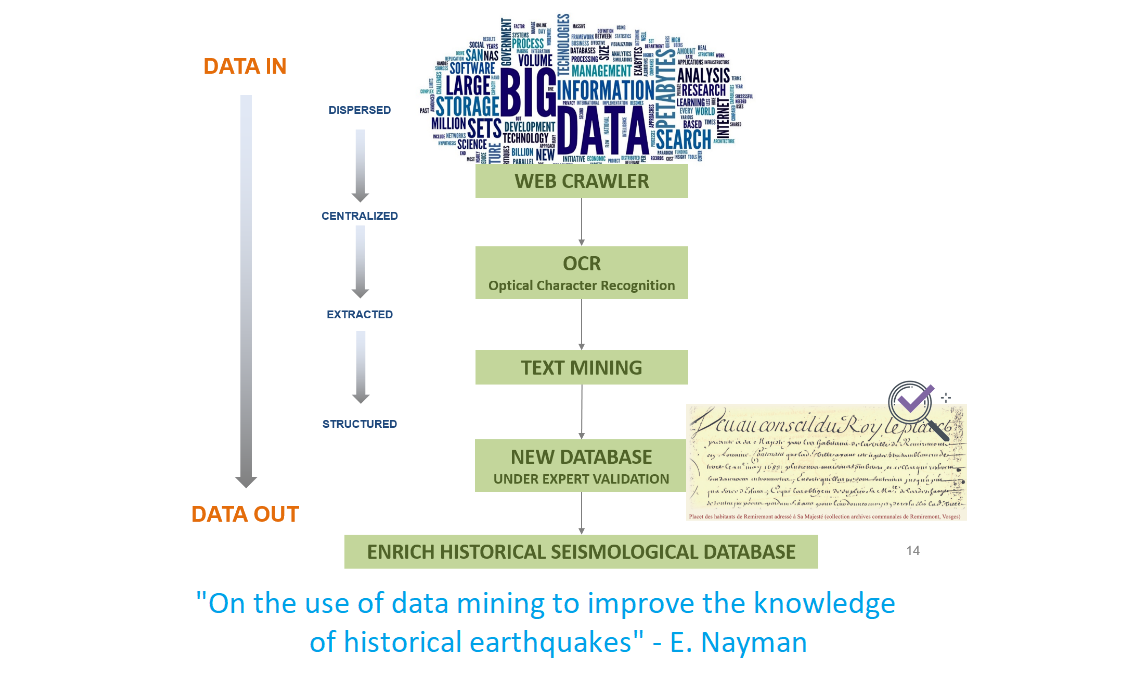 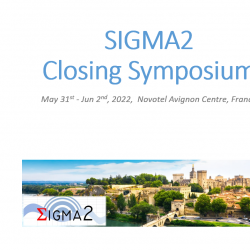 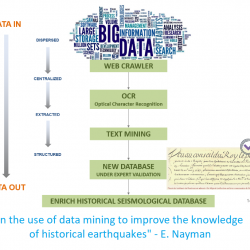 The uncertainties affecting ground motion models remain the highest source of uncertainty in the results of seismic hazard studies.

Despite the progress already done, it is important to obtain a prediction of ground motion adapted to rock conditions (as an input for site response simulation), and adapted to various types of sites.

The main scope of WP3 is to improve the understanding and description of ground motion, in order to provide a more realistic assessment of seismic motion for seismic hazard assessment.
The work axes include: 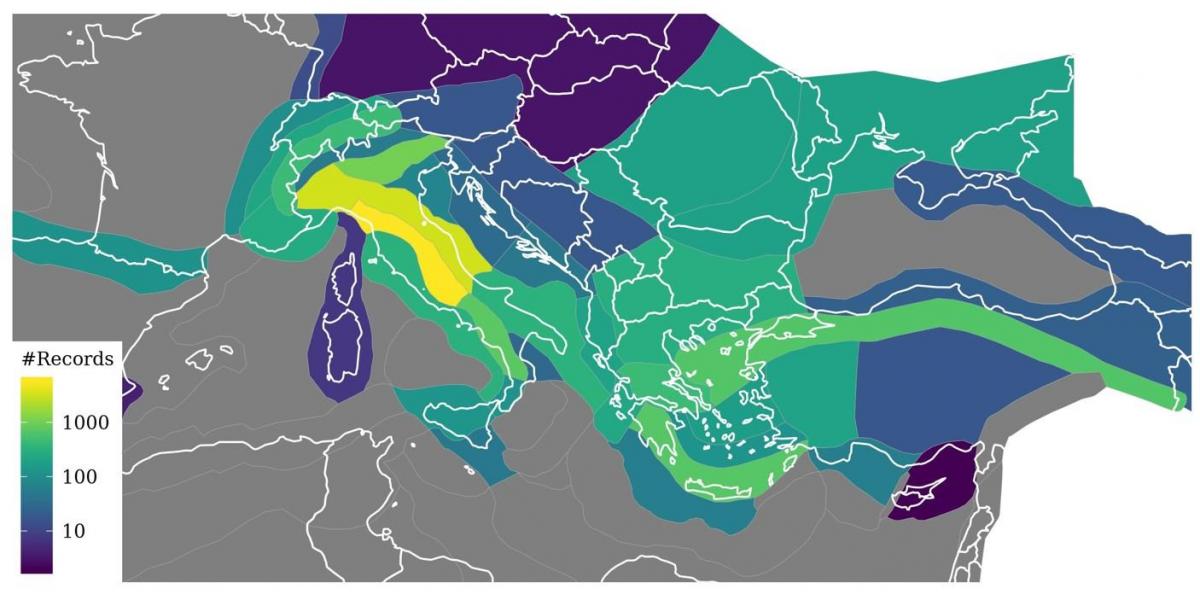 Program of research
The aim of this work is to develop ground motion models specifically referred to hard rock horizons, obtained using “corrected” ground motions. Ground motion recorded at the surface at stiff soils and rock sites is corrected from its site response in order to obtain reference hard rock ground motion. Site response with respect to the reference condition is evaluated both, by 1D simulations and by Generalized Inversion Techniques (GIT) of Ground Motion.
Organization

The aim of this work is to improve the strategy for reference rock sites identification and for reference ground motion prediction. To assess site-specific ground-motion, it is common practice to calculate seismic hazard at bedrock and then apply a deterministic site-specific amplification factor, computed using 1D/2D numerical site response analyses. For this reason, the ground motion at bedrock should be free from amplification phenomena and its site response flat. This can then be considered “reference rock motion”. Ground Motion Models (GMMs) are generally calibrated using records at stations classified as rock that, however, can be affected by site-effects. The assumption currently made that GMM based rock site predictions are unaffected by amplification phenomena may cause inaccurate prediction of the expected motion when the hazard is evaluated including site effects, due to the amplified response of rock motion.
To address this issue, following Felicetta et al. (2018), we propose a strategy for the identification of reference rock sites based on seven proxies, inferred from geophysical and geological data and from seismological analysis.

Program of research
The deliverable is developed as follows:
1. Identification and qualification of a training dataset on which computing and testing the proposed proxies. We select a dataset composed by earthquakes and stations located in central Italy, where a huge quantity of data are available after the recent seismic sequences that have occurred in this area (2009 M 6, L’Aquila and 2016-2017 M 6.5, Central Italy). The stations are characterized collecting information about: i) installation, ii) local geology, iii) geophysical and geotechnical data; iv) seismological analyses (residual analysis, horizontal-to-vertical spectral ratio on earthquakes and noise signals), and v) Eurocode 8 soil category.
2. Given the large number of stations included in the training dataset, a preselection to identify candidate stations to be references-rock sites is performed. These stations are selected executing a residual analysis with respect to ITA10 (Bindi et al., 2011) predictions for generic rock (EC8-A) and estimating the horizontal site-to-site term (δS2S) and the associated variability. Since these terms quantify the systematic amplification/deamplification of the observed ground motion at a given station, we consider as possible reference sites only those having the site-to-site terms close or lower than zero;
In addition to the horizontal site-to-site term (δS2S-H), additional indicators, that may affect the seismic response of a site, are selected as proxies:
4. To evaluate the impact on the ground motion median values and associated variabilities, a set of GMMs for generic rock and reference rock sites are calibrated.
Organization
Funding member: EDF, ORANO

Derivation of European GMPEs based on new/different intensity measures

Program of research
The aim of this task is to benefit from the recent improvement and extension of ground motion datasets in Europe (ESM, Lanzano et al., 2019) and in low seismicity areas such as France (Task 3.5.1, Traversa et al., 2020) to develop updated GMPE for a set of complementary Intensity Measures (IM, such as Response Spectral Acceleration, Fourier Spectral Acceleration, Arias Intensity, Significant Duration, C.A.V., PGV etc). Correlations among IM will also be provided.

"From a Regionalized Ground-Motion Model for Europe and Middle-East to Site-specific Seismic Hazard Assessments in Low-to-Moderate Seismicity Regions" by S. Kotha (6.89 Mo) 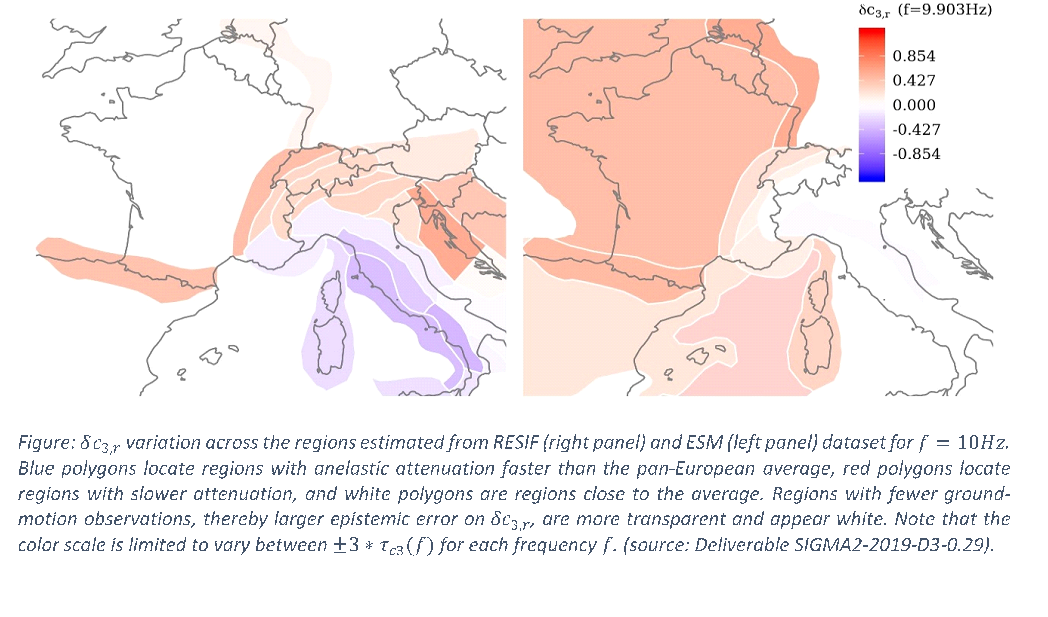 The objectives of these tasks are manifold and cover: 1/ the development of novel approaches for earthquake ground motion prediction by physics-based numerical modeling, including the implementation of a novel dynamic rupture model and the development of an innovative strategy to generate broadband ground motions using artificial neural networks; 2/ the application of such approaches to the simulation of real case studies, as the 2016 Mw 6.5 Norcia earthquake and the 2019 Mw 4.9 Montélimar earthquake in France; 3/ the characterization of near source ground motion by constructing a synthetic dataset of broadband physics-based ground motions and the development of a hybrid near-source GMPE using both synthetics and recordings; 4/ the assessment of fragility curves for selected Nuclear Power Plant components for the specifically developed near-source ground motion.

The aim of this research task is to better understand how to use the GIT schemes in different applications. The objective will be fulfilled by performing a methodological benchmark of different generalized spectral inversion methods and dataset configurations. The benchmark will be run as a project open to worldwide volunteer teams: the GITEC (Generalized Inversion TEchniques Comparisons) project.

The participating groups will perform GIT on all the provided datasets following different strategies and hypothesis. The results will be shared and discussed during workshops, at the end of which conclusions and recommendations will be drawn.

The main goal is to describe azimuthal dependence of attenuation of seismic waves in the Bohemian Massif and its vicinity (Central Europe). Macroseismic studies of various historical earthquakes with epicenters in the Central Europe region have shown a significant elongation of isoseismal lines in some directions (Zátopek, 1948). Recently, this phenomenon was confirmed on the basis of instrumental records of two moderate-size earthquakes in the Vienna Basin (Málek et al., 2017). It has been found that the peak ground velocity amplitudes (PGV) and peak ground acceleration amplitudes (PGA) at comparable epicentral distances but different azimuths may vary by as much as one order of magnitude. An inspection of the individual seismograms suggests that the phenomenon is associated mainly with the propagation of high-frequency S waves. Significant differences in frequency content of the seismic waves radiated to different azimuths are also demonstrated.

Within the scope of SIGMA-2, we have investigated the azimuthal dependence for several moderate-size earthquakes in Central Europe with moment magnitudes between 2.3 and 3.8. We selected 9?earthquakes from 7 seismic epicentral zones from the years 2012 to 2018, which represent the strongest events in those zones for the last decade. The number of seismic stations in the region under investigation has been increasing (both permanent and temporary). It enables us to observe the attenuation of seismic waves directly from the measured seismograms. The results show that the PGV and PGA depends strongly on the azimuth of wave propagation for some earthquakes. The azimuthal dependence has not been considered yet in the evaluation of seismic hazard for the Temelín and Dukovany nuclear power plants which are situated in the Bohemian Massif. 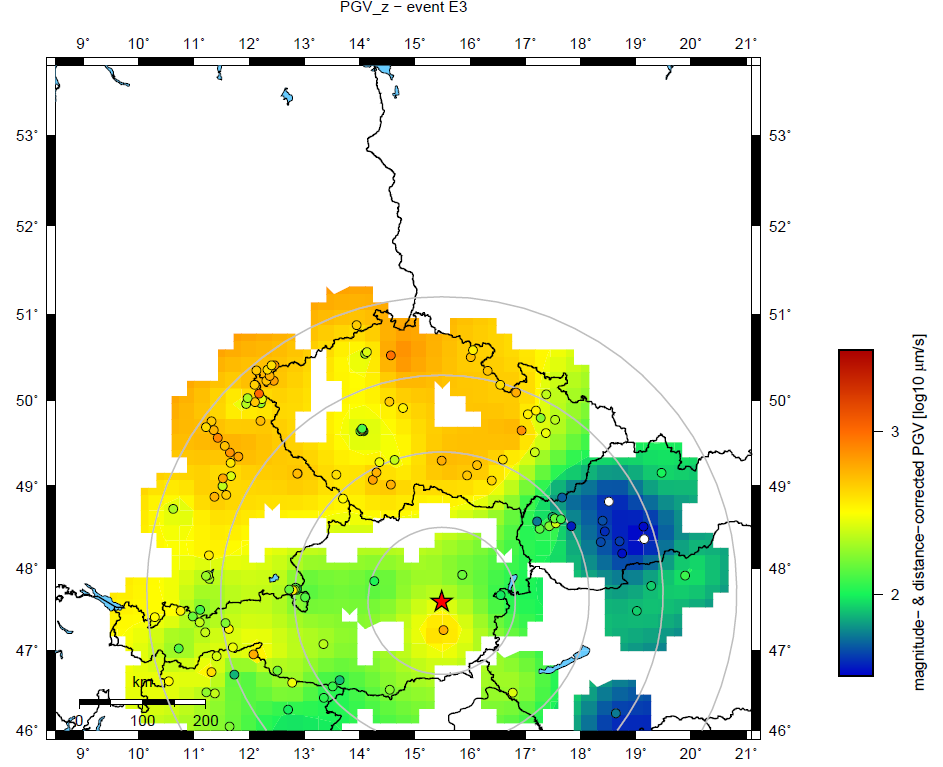 Estimation and mapping of the intrinsic component of seismic wave attenuation in Europe as a complement of the absorption component.

Motivations
Among the physical processes that control the amplitude of seismic waves and therefore ground motion, attenuation is probably the most poorly understood and undetermined factor.
Program of research
The objective of this task is to develop a genuine tomographic approach to the mapping of seismic scattering and absorption properties of Earth materials at the Western European scale. This will allow to unravel key geological features and to significantly improve our ability to predict the variability of seismic ground motions at the regional scale, as well as to provide an improved physical interpretation of some ground motion parameters including the high-frequency attenuation proxy k.
Organization
Funding member: EDF

Link to the RESIF website: https://www.resif.fr/
Link to the RESORCE database: https://www.resorce-portal.eu/
Motivations
The main goal of this task is to extend existing ground motion databases with weak motion records from a low-to-moderate seismicity regions such as France.
Program of research
With this goal, a high standards dataset of earthquake ground motions recorded in Metropolitan France between 1996 and 2016 is implemented. This dataset is intended to serve the scopes of a large seismological community; however, its primary aims are engineering seismology and earthquake engineering applications.

This new dataset, called the RESIF dataset includes more than 6500 quality-checked records from 468 earthquakes recorded at 379 stations. It is complete down to magnitude ML 3.5 over the whole French territory and less (about ML 2.5) in the Eastern part. Magnitudes range from ML 2.4 to 5.6 and from Mw 2.0 to 5.2, while distances range from less than 1 to 600 km. Given the occurrence of major earthquakes during 2019, this dataset will be extended up to the end of 2019. 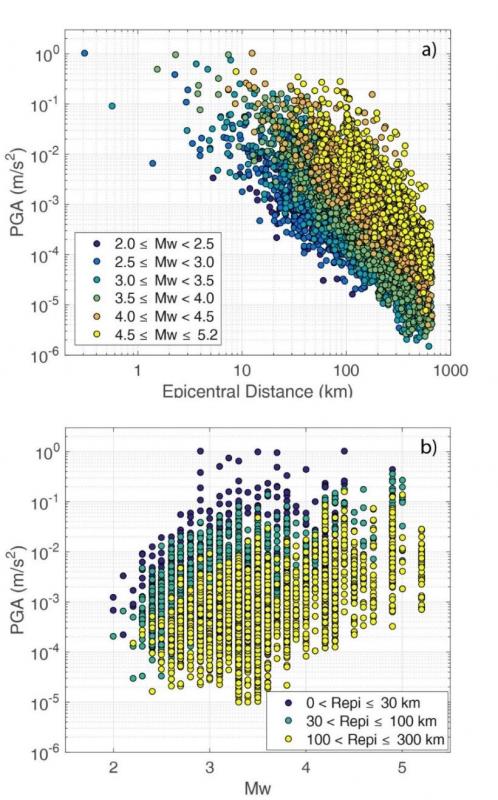 Motivations
The aim of this benchmark is to evaluate the performance of complementary simulation methods in a low-to-moderate seismicity region as South-Eastern France.
Program of research

The objective of this task is to implement empirical (and/or stochastic) simulations of ground motion and in particular the Irikura recipe currently used in Japan and to apply this approach for the simulation of the 2019 Mw 4.9 Montélimar earthquake. Advantages and drawbacks of this approach with respect to the physics-based simulation approaches developed in task 3.3.2 will be evaluated in the framework of a benchmark focusing on the simulation of the 2019 Montélimar earthquake.